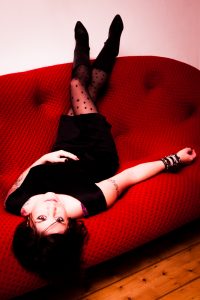 Pepe le Moko has been plucking the bass guitar for various indie rock, pop and blues artists for over 20 years. Fans of 80s indie rock will remember her as the bass player for The Wedding Present with whom she toured all around the world from the USA, Australia and Asia to mainland Europe, UK and Ireland.

She played major festivals such as Primavera Sound Festival, SXSW, Off Festival and played in venues of up to 3,000 people capacity. Radio experience includes numerous live sessions for the BBC, KEXP and WNYC in the USA and various major European radio stations.

Lovers of Blues and Soul would have seen Pepe on stage with guitar virtuoso and vocalist Ben Poole as part of his trio, four piece and six piece line up. Extensive touring in continental Europe and the UK with the Ben Poole Band included highlights such as the Blue Balls Festival in Luzern and Gdynia Blues Festival.

Whilst her signature sound is an overdriven gritty driving bass on a P Bass, her recent work features the balanced warm sound of her Spitfire by GB Guitars.